I was thinking about AWS access key IDs yesterday. Specifically, the one that’s often in the AWS_ACCESS_KEY_ID environment variable, or aws_access_key_id in ~/.aws/credentials. I was trawling through CloudTrail and the repetitive nature of them caught my eye. 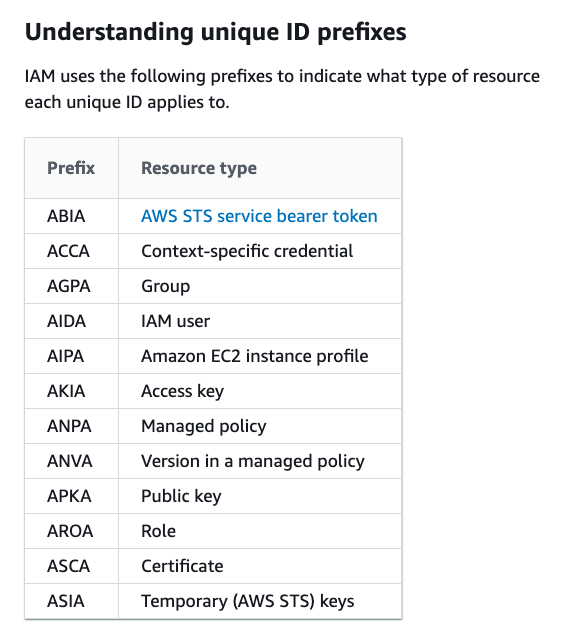 Beyond that, I’m not aware of any documentation on the format. A couple of years ago, Scott Piper of Summit Route did some research and wrote down his findings. (I didn’t find this blog post until after I did yesterday’s research, would have saved me a lot of time!) There’s also the error message returned by sts:GetAccessKeyInfo:

So we know that it needs to be at least 16 characters - but I’ve personally only ever seen 20-character long key IDs.

I noticed that the characters were always alphanumeric (A-Z0-9), but not the entire 36 character set. 0, 1, 8 and 9 were absent. That leaves us with 32 characters - a nice even five bits per character. So the total set of valid characters is ABCDEFGHIJKLMNOPQRSTUVWXYZ234567.

I noticed that keyid[4:12] (the eight characters after the AKIA/ASIA prefix) were almost always the same value for a given AWS account. On a whim, I decided to pass an almost-valid-but-last-character-changed to sts:GetAccessKeyInfo and it still returned the same account number! This means that there isn’t some kind of checksum. Interesting. I incrementally worked out I could completely change keyid[13:20] (the last seven characters) and the returned account ID would be unaffected.

keyid[12] was interesting. It would add or subtract 1 from the numeric account ID depending on if it was before/after the letter Q in the alphabet.

Lets recap so far: keyid[4:13] are somehow related to the account ID (with the last one being kinda weird) and keyid[13:20] appear to be completely random. I wanted to see if I could reverse-engineer the algorithm that sts:GetAccessKeyInfo is using.

I ran the following to see what changing keyid[11] would do:

I used this knowledge to write following Go code to reproduce sts:GetAccessKeyInfo:

Playground link to try it yourself.

Conclusion, or so I thought

I was ready to publish this blog post yesterday, but then I hit an issue. My access key ID for my personal IAM user hasn’t been rotated since March 2016 (I know, I know!) It begins AKIAJ... - what? Last I checked, J came before Q in the alphabet and so my code returned a negative account ID. But my account ID isn’t negative. Well shit.

I tried what I tried earlier: tweaking the last character. No luck. Then I tried some other characters - no luck there either. So I guess this type of key is different. I then looked at the distribution of keyid[4] in my CloudTrail logs. Most are in the range Q-Z2-7, but there are some that are I or J. What’s different about this key? Is it an account thing?

I asked for help on Twitter and got some great responses. Especially helpful was @NYSharpie’s tweet where he noticed keys newer than 500-600 days are when it switched to >= Q. Looking in my own account seems to corroborate that: a key 508 days old has a Y and a key 648 days old has a J.

Please join the conversation if you have any wild theories, I’m keen to explore this pointless space. Here’s the tweet again if you want to respond.