In my post AWS federation comes to GitHub Actions I wrote about GitHub Actions’ new ability to federate access into AWS (and other clouds) via OpenID Connect. This is really great, much better than the prior state of affairs, but needs improvement on the AWS side.

The above is the full extent of what exists today. I think it’s insufficient, especially in light of the wide interest in GitHub Actions’ support and EKS’ (AWS hosted Kubernetes service) dependence on OIDC.

In the previous blog post, I shared an example CloudFormation template for using the GHA OIDC feature. It looks like this: 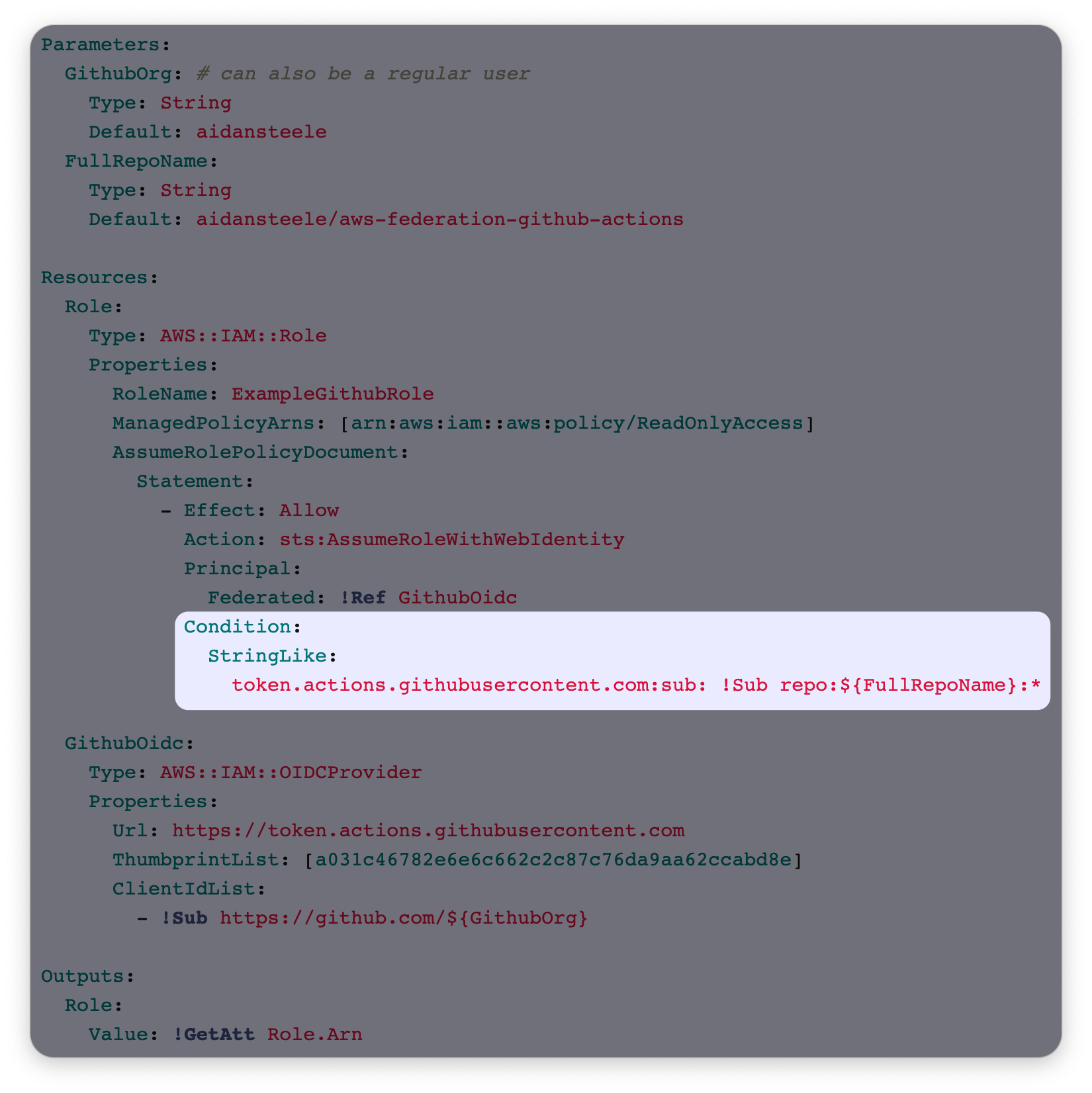 I have highlighted the most important part of the template. That condition is technically optional (in the sense that everything will work without it) but devastating if it is omitted. It is the only thing that controls which repositories on GitHub are authorised to assume this role. (GitHub allows configuration of the aud claim, so the ClientIdList property of the OIDC IDP is not a security control.)

The same problem exists for Kubernetes: once the IDP exists in an account, there is no way for administrators to enforce that roles in that account can only be used by particular Kubernetes namespaces.

Request: something equivalent to permission boundaries for role trust policies. Really, anything. It could be “trust policy boundary” policies that are attached to individual roles with conditions mandating attachment in iam:CreateRole and iam:UpdateAssumeRolePolicy. Or it could be policies that are attached to the OIDC IDP IAM object itself. I haven’t thought about which is preferable, but something is needed.

AWS IAM has supported role session tags for a while now. Have you ever looked at how they work for roles bootstraped from OIDC IDPs? Here’s what needs to go in the JWT issued by the IDP: 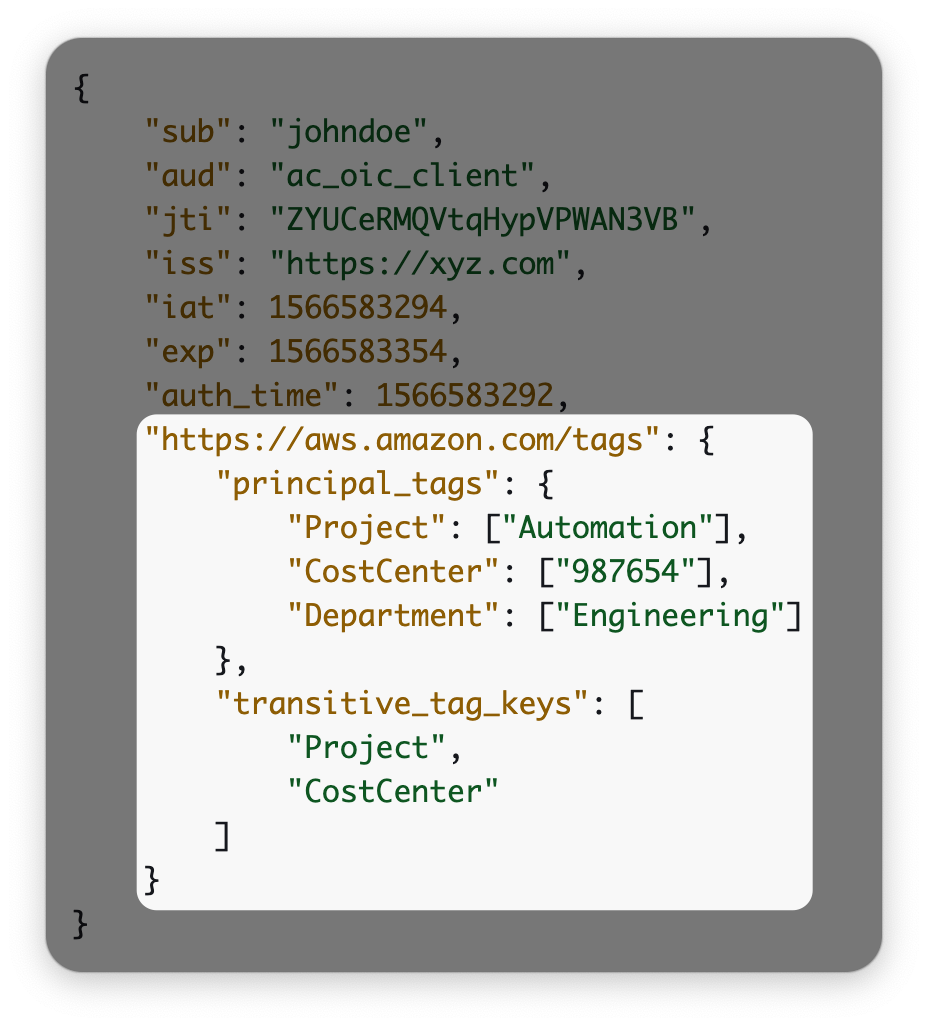 Do you ever see GitHub Actions supporting this? Or any social network? Or GitLab? Not even AWS EKS vends ID tokens with this claim namespace. I can’t think of any use case for this design. If you have that much control over the format of the JWTs, you’re probably issuing them yourself. In which case, why not assume a role directly? Anyway, I digress.

Request: Give me a way to map arbitrary claims from the OIDC token to role session tags in AWS. The tokens issued by GitHub have some extremely useful information and I want to use it in my policies. I also want those values to appear in CloudTrail. Hell, they should be usable in the above request for trust policy boundaries: maybe roles should only be assumable for workflows initiated by aidansteele.

Again, these could be configured on either a per-role basis or as a property of the OIDC IDP object. I’m erring towards the latter in this case. It’s the kind of thing you want consistency in. And again, this would be useful for EKS.

AWS is customer-obsessed, but not silly. They’re not going to build this functionality just because I asked for it. But they use demand to prioritise work. I would encourage you to file a feature request ticket with the IAM team adding your +1 to the ask. Here’s an example that you definitely shouldn’t use. 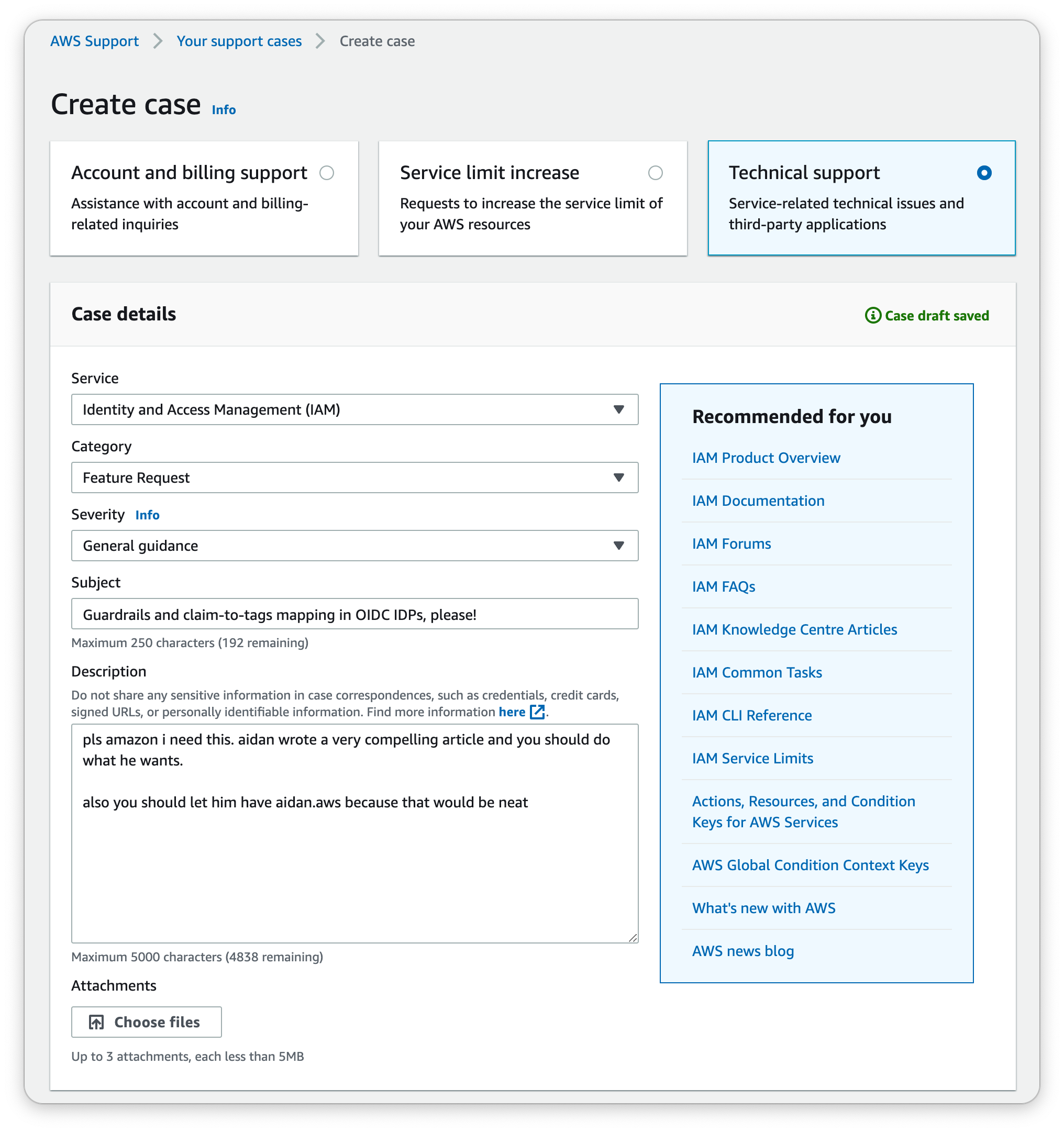